The tour has been planned in TransIT and is ready to be driven. But what is the most efficient way to get it to the driver?

The TransIT Mobile App is compatible with every Android smartphone ? the planned tour therefore lands directly on the driver's smartphone. The optimal coordination between the app and TransIT benefits both the driver and the tour planner. The features of the app optimally integrate the driver into the system, while the planner always keeps an eye on the tour.

The driver receives a stop list on the TransIT Mobile App with all addresses to be visted. These can be visted conveniently and compatibly via Google Navigation. 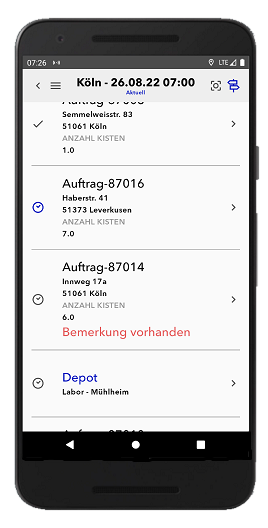 While the driver is on the road, the data is recorded via GPS and can be viewed by the tour planner via TransIT. This records where the driver is at the moment, how the planned tour is going and whether there are any delays.

In the next step, the recorded GPS data is used for evaluation in TransIT. Here, for example, the estimated time of arrival can be determined. The customer can be informed of this with an automatic message.

Target-performance comparisons of the GPS data show how the tour was planned and how the driver actually drove it. From this, it can be determined whether there is potential for optimisation in the planned tour.

Tour speeds and holding times show when and how long the driver has stopped. Unintentional pauses or holding times that are too long can be optimally checked here.

The order status not only enables tracking of the tour, but also provides the perfect overview in case ongoing tours need to be rescheduled.

For further order feedback and documentation, the driver can record photos and send text messages to the trip planner via the app. This allows him or her, for example, to document the correct delivery in case of later complaints if the customer is not there. 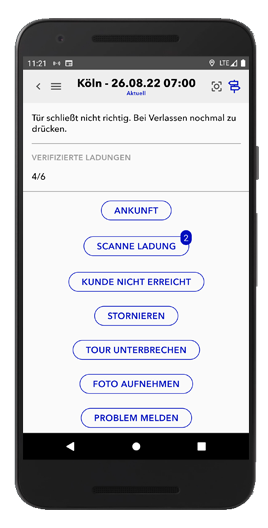 Any questions?
We are happy to help you.